Student journalist Greta Stuckey interviewed me for the Marist Circle, and I so appreciated the opportunity to speak about the therapuetic power of art and the Arts for Healing programs I direct at The Art Effect.

The full article can be viewed here!

I’m honored to have been featured in Scenic Hudson’s Community Changemakers video spotlight series. I’m humbled by the sheer awesomeness of the rest of the featured community leaders in the series, there are some true Poughkeepsie legends in there! I’m very thankful to be in such remarkable company.

The full video is available here!

Building on my work with the smartphone-focused fieldwork course at Vassar College this past spring, this summer I designed and taught a two-week intensive digital literacy/smartphone summer camp called D-LIT. To read all about our day-by-day adventures, check out our camp blog!

The Poughkeepsie Journal ended up doing a piece on D-LIT.

“…only 3 percent of the average teen’s digital screen time is spent creating: writing, coding, or making digital art or music, according to Common Sense Media. Most of the time is devoted to watching, listening or reading, playing games and web browsing, or using social media. ‘That’s a very small percentage of a huge amount of time,’ said Mary Ellen Iatropoulos, director of experience at Art Effect. The camp seeks to change that for the middle schoolers.

The hope, Iatropoulos said, is students will ‘get over the initial hurdle of not knowing where to go or what apps to use … and in their free time, dive deeper’ into a smartphone’s creative possibilities.”

TFW you live-tweet an event so hard the follow-up newsletter quotes you 💪 #remixnyc pic.twitter.com/PRFtIneqZA

Following an exciting and inspiring few days of attending the REMIX NYC conference with co-workers, I was delighted to see the organizers include a tweet of mine in their capstone newsletter. Glad to be of service, REMIX NYC! Thanks to Wave Farm (formerly free103point9) and NYSCA for sponsoring us! 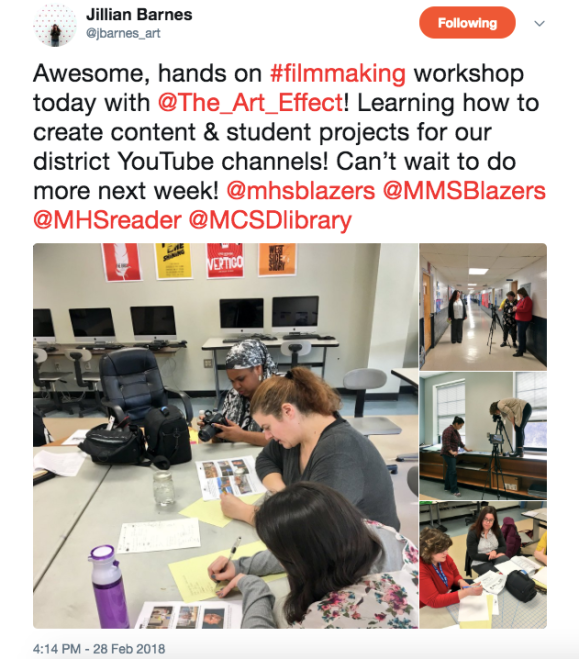 And yes, that is me standing on the radiator. Anything the name of film!

I am quoted speaking about the winter holiday celebration my organization held for teens and their families. In a nutshell…

“The private party for students will be held after Christmas, and it will feature a student art display and screenings of student videos and films. In addition, 40 students will go home with a gift related to their interest.

“One student, for example, is getting a sketchbook and pencils, while another is getting a flash drive to store their digital work,” Iatropoulos said.

The goal of the gifts is to allow these students to continue pursuing their passions at home, said Melissa Clark, director of community impact at United Way.”

I’m not sure how this footage from the 2012 Vancouver Slayage Conference ended up in this video listicle, but check out my cameo at 3:30. 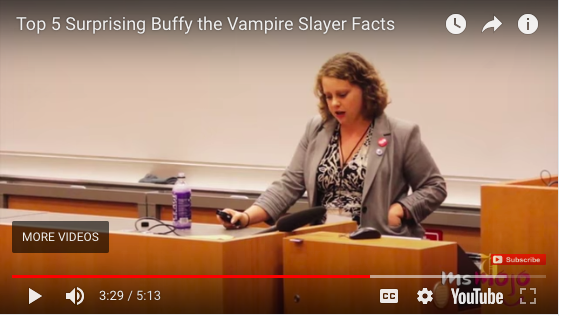 The Spark Media Project youth-produced film Santa Woman was selected as a finalist in The America I Am youth film fest from the Tribeca Film Festival!

The Poughkeepsie Journal covered the story here. They quote me regarding this tremendous achievement for the youth and for Spark Media Project (screencap below). 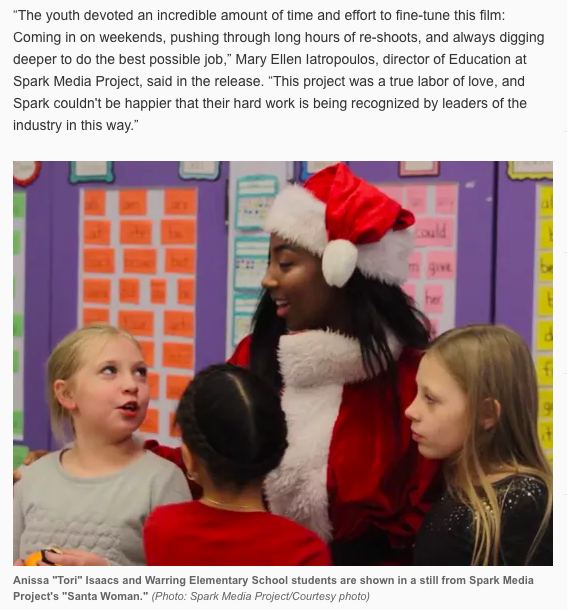 I found this review of the book I co-edited (Joss Whedon and Race: Critical Essays) and it’s gratifying beyond my wildest writerly dreams.

“Television isn’t just entertainment. It’s a mirror of our cultural attitudes. What we don’t show on television is, in some ways, even more important than what we do. The sort of analysis presented in Joss Whedon and Race is absolutely vital in understanding how even people with the best of intentions are helping to perpetuate a system designed to uphold white supremacy.”

“Called Poughkeepsie, Connected, the nine-minute film follows two teenagers (Christopher Bird and Constantine Jackson) as they walk southward along the riverfront, from Walkway Over the Hudson through Upper Landing, Waryas and Kaal Rock parks. In addition to exploring these existing assets, the youth learn about the need to provide better links between them and the downtown.”

Read the rest of the article here.

Northhampton University (UK) covers the 7th Biennial Slayage Conference On the Whedonverses (it briefly mentions the paper I presented with Dr. Lorna Jowett).

I was invited to La Salle University in Philadelphia, PA to give a plenary address as well as give a guest lecture to an undergraduate seminar. 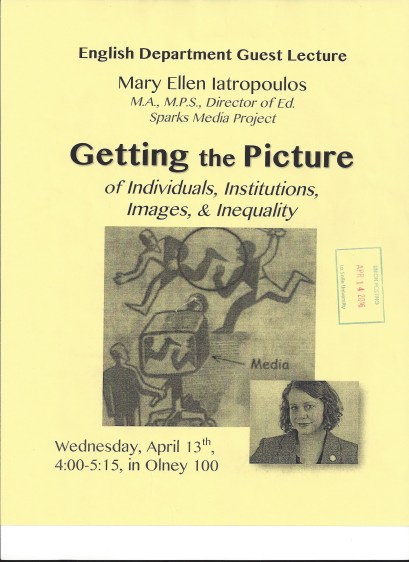 Spark Media Project received an award commending the organization for its institutional inclusivity. We’re proud to work with a very diverse group of people and we celebrate our neuro-divergent team members! 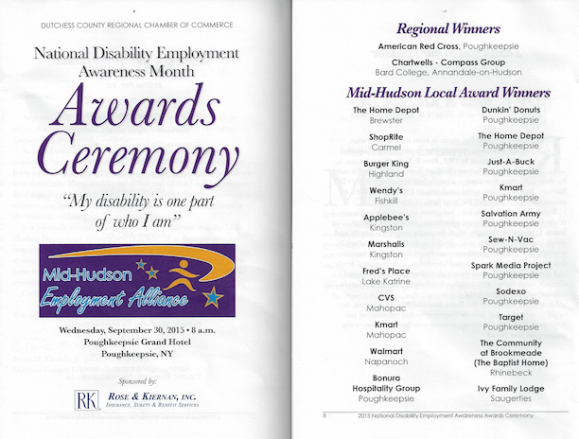 I had the chance to design a series of Shakespeare residencies in 12th grade ELA classes revolving around adapting the bard’s plays into stop-motion animation shorts. 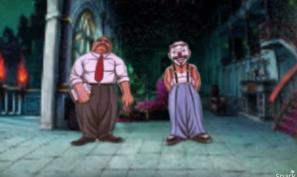 One of my many job responsibilities is managing our internship program, and during the spring 2015 semester, the Health and Human Services Department at SUNY New Paltz recognized my work in developing and shaping their undergraduates’ internship experiences.

Hudson Valley News Network covered the ribbon-cutting even officially celebrating the switchover from Children’s Media Project to Spark Media Project. And I got to hold the oversized scissors!

In collaboration with the Beacon Indie Film Festival, I taught a “weekend whirlwind” filmmaking intensive workshop at the Howland Library in Beacon that caught the attention of Hudson Valley News Network. The fabulous Donna Reyer brings you the story…

Read the write-up and watch the video here. To hear me wax pedagogical over digital media and 21st-Century learning trends, skip to 1:19.

I delivered a talk entitled “It’s About Power: Critical Race Theory Across The Whedonverses” as a featured plenary address at the 6th biennial Slayage Conference on the Whedonverses. The below is the journal’s coverage of my speech.

Read the rest of the official Slayage conference report here!

Read a review of SCW6 by the brilliant Jennifer K Stuller’s write-up here.

Vassar’s Miscellany News provided the following writeup of a panel in which I participated, “Diversity In Nerd Culture,”at NonCon 2014. 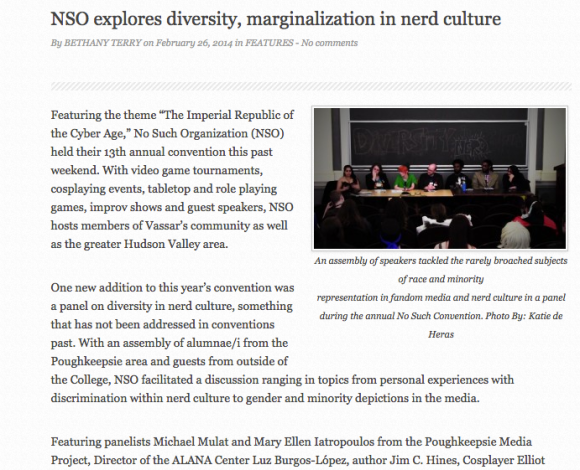 ” . . . thank you for taking the time to come and speak with my Juvenile Delinquency class this semester. It was a perfect presentation to what we have studied about youth, their struggles, and community efforts to support them. It was particularly relevant as I found myself frequently referring back to your program and its components throughout the rest of the semester. It is a good example of many areas that we study and students always remember lessons that include a hands-on learning experience. So I am very grateful to you for coming and hope that I might call upon you again next Fall [semester] when I teach the course again.”

Once again, thank you for the time and energy you gave to share your knowledge and services with Dutchess County’s youth.”

In which I am quoted regarding the benefits the Vassar Community Fellows Program bring to Children’s Media Project and to Poughkeepsie nonprofits in general.

“Mary Ellen has an uncanny ability to dive into the most complex, controversial areas of human identity and cultural construction, and to guide adolescents through lessons that lead to self-discovery and profound insights about how our minds are influenced by media messages and dominant cultural symbols.  A passionate educator, she makes this information immediate and relevant to their lives by incorporating pop culture analysis (such as “The Rue Snafu”—the ignorant public response to the film The Hunger Games) and stretching their minds to take a second look at cultural constructions that can be taken for granted and internalized.  While many shy away from tackling these issues of stereotype and prejudice in the classroom, Mary Ellen’s professional presentation, extensive knowledge base, and compassionate demeanor make the experience of venturing into these sometimes rough waters not only a feasible task, but also an immensely rewarding learning experience.  Students and educators alike will benefit from Mary Ellen’s work, and I am grateful to have had the opportunity to collaborate with her on such meaningful learning.”

Breaking the Silence (WHVW 950 AM)

Guest Appearance on AM radio show, in which I speak about popular culture’s tendency to trivialize domestic violence and its impact on everyday behavior.

Breaking the Silence- June Show by Leah Feldman on Mixcloud

Excerpt from review of 2010 Teaching the Hudson Valley conference: “Mary Ellen Iatropoulos gave a great presentation on how to integrate video editing, literature, and the environment into a single lesson.”